You are here: Home » Articles » A little relentless puppy making all the dogs play

A little relentless puppy making all the dogs play 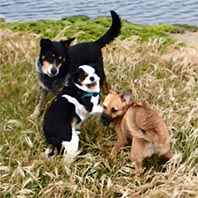 This video shows one of the most fearless relentless playing dogs I have walked called Louie.

Play is a vital part of every dog's life.  While wolves stop playing when they enter adulthood, dogs can play like puppies for their entire life, if they learn to be social and have a preference for 'fun'.

This form of play is all about sorting out pack order.  The winner is higher in the pack. Some dogs however will continue to play and dominate another dog even though they are clearly physically superior to a dog.

Early on in the video you will see Louie play with Frodo a cavalier spaniel cross. This might seem 'unfair' to some people, but there is a reason I allowed the play and then stopped it (after the camera was turned off). Frodo was not harmed, and he tentatively engaged in play and began re-learning how to play, and how to be a dog, with very low risk of harm.

A Very social dog will choose more carefully who it plays with. It will play for fun and for sorting out pack order, that is keeping another dog lower than it in the pack. In the wild this was meant to give the more dominant dog higher status in the pack, allow it more choice of mate and quicker access to good food that was caught. It also meant many more responsibilities such as leading the pack and ensuring the whole of the pack were looked after.

In the case of Louie V Frodo, Louie is taking a liberty on a dog that is less physically able than he is, however he is soon learning that other dogs will come into the play, and may even challenge him if he keeps it up. So Louie is learning that although he can choose to play fight with Frodo, it will bring consequences from other dogs, Frodo's allies (or dogs wanting to assert their own dominance on Louie).  Louie is learning that if he does this to a dog in his pack, one that is less social, that he may have two 'stranger' dogs play/ fighting him for domination, something that most dogs do not want.

Frodo on the other hand is learning that not every dog is a lounge dog. That even though Frodo has given no indication he wants to challenge Louie, that Louie (STILL A PUPPY) is going to challenge him and he is going to have to learn to defend himself. Louie's challenge is in a safe environment. Louie is just being a puppy taking it too far (as he tries with most dogs).

Note I don't allow this with dogs outside of the pack, or ones that have unknown social status. If you weren't there you don't know how these dogs have reacted to each other over many months. The pack has a good relationship with each other, and it would not be normal for dogs not to want to play with each other. With big powerful breeds however there are many more restrictions of how and when they can play as dominant play in those situations can lead to serious fighting.

You may wonder after taking on an easy play target like Frodo why Louie would purposely challenge Sidney a much larger dog. And why Sidney would be so interested in chasing Louie.

This is the magic we sometimes get to see at the off lead parks.

Louie is interested in causing as much mischief and chases as he can. After the regular dogs get boring, he moves onto bigger ones.

Sidney is the perfect dog to challenge/ play with because his border collie part has him be obsessed about something, and usually that something is high energy in a working dog. If a working dog (border collie, kelpie, blue heeler) is around and is high energy (dominant or aggressive or very anxious) Sidney will shadow the dog for as long as he can. For some reason he is just attracted to high energy dogs and it really increases his excitement. He is allowed to do this while the other dog is not bothered by him.

That is why it was so perfect when Louie kept running around in front of Sidney until Sidney decided his energy was high enough to bother chasing (even in a small and non working dog package).

The point about this video is that yes Louie is an insistent player, but in a social (read tolerant) pack, he can express that and be taught more safe/ productive play methods than forcing every dog to play regardless of their desires or social level. Some dogs take longer to learn this nuance of socialisation than others (From a puppy age), and Louie is one such dog. But in a social pack, there is a lot of time to learn and little danger of bites or injuries occurring. This is safe socialisation.

The dogs come home tired and satisfied and have usually not just expended energy, but learned something each park visit.

Article by Bruce Dwyer. Like this article? Then please use a LINK reference towww.dogwalkersmelbourne.com.au