You are here: Home » Blog » Dog Walkers in the inner west of Melbourne and the summer heat 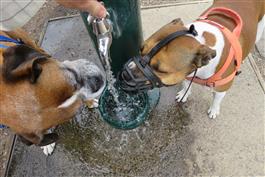 We have had a very late summer in Melbourne this year. But most people should be aware that most dogs are from European ancestors and with thick coats can really suffer in hot Melbourne summers.

It is true that dogs will become somewhat acclimatised to whatever climate they move to, but that only goes so far. Yes our winters are more mild that many European winters (UK and Western Europe) but that just means that they shed a little more of their coats.

In summer ALL dogs (except African wild dogs) struggle to remove heat from their body.

My dog for instance is a spoodle. Being half poodle he has a very thick curly coat even when it is clipped on the shortest clipper setting. Anything over 25 degrees Celsius even with the shortest coat and he like me wish we were inside with the air-conditioning.

I can also sweat, which for the majority of a dog's body is impossible, they just dont have the sweat glands like we do.

Dog walking routine in Melbourne off lead parks in Summer

We still usually go for the same amount of over all time, and on the way there and the way back I have air-conditioning in my car. And we go early in the morning, but I make sure we do a lot less walking. We usually cut our two laps down to one, and take many water stops, and if I am going to allow them to play, it is in the shade usually.

Some people say they don't like their dogs walking in summer, but they are the same people who don't walk their dogs in winter or on most days of the week. Sensibly taking dogs to off lead dog parks, getting some exercise and the very important socialisation is always vital to any dog, EVERY day.

The dogs are just so lucky that they have a walker who dislikes the heat as much as they do !