You are here: Home » Blog » Dog Walking in the inner west of Melbourne doesnt have to be that scary 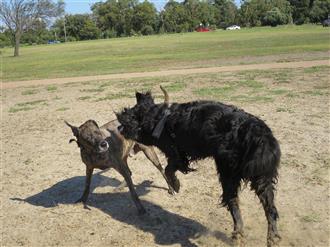 Dog Walking in the inner west of Melbourne is 100% beneficial

I can see people's eye's light up as I write this blog about how scary this photo is, how dangerous the dog play is, and all manner of judgements.

True these comments are usually by people who have never been to a dog park regularly and might be my future clients. But there is a lot of information behind that photo, that the novice will not know.

For anyone who has met the #bernese or #masstiff cross seen in these photos they will know how friendly and fun the dogs really are. In fact the bernese mountain dog (the big black one doing the jumping) is one of the most insecure large dogs you will find. But a very social and insecure dog, that means that she isn't going to be an anxiety bite risk, just a dog that loves clowning around to impress potential play partners.

Because she is social, and arrived at the off lead dog park in the back of my car along with Blitz, she knows that he has a lot more physical power than his 12 years of age might suggest.

Amy is just jumping all around in front of blitz trying her best to con him that she is a very physically fit dog that could dominate him if she wished (its kind of a defence mechanism).

I know, as well as the other people who have met blitz, that he isn't going to fall for this, but he also doesn't want to get caught up in her moment of madness and risk injury, so he lets her do this dance as the owners and the dogs look on. It only lasts a few moments and it is over. Though it is hilarious!

For the many videos I have taken of this kind of play by Amy and put on youtube and my daily facebook page, you would know that Amy does like to let this crazy out of the jar a few times, but only for short bursts. She has great strength but very little endurance (in Australia's comparatively warm weather), plus bernese mountain dogs are not known for their aggression. They pull things and like to lounge around for most of the time that they are not required to do work for their owners (the original reason for the breed). And that is exactly why for health they need to walk each day and to meet up with other dogs.

The whole point of off lead dog walking is allowing dogs to get fit and learn to be social. Being social takes many different paths, and dogs that are super social and walked regularly are happy to self express in many ways that dogs never allowed off lead can only dream of, and would be scared to do initially.

Socialisation and pack walks are for mental healthy and dog stability as much as anything. A dog that is off lead and social will play within socially acceptable limits of the owner and the dog pack. They will test limits, but the more social they are the less likely that on lead or off lead they will do anything as risky as become aggressive.

Dogs not walked off lead regularly often fall into the fear aggression category of either fighting or running away.

I don't have this concern at all for the two dogs shown in this photo as they regularly walk with us, and are very social and I know what they behaviours are likely to be like.

People with little dogs, or rescue dogs or aged dogs often think that off lead dog walking is not for them, and that is exactly how off lead fears are reinforced in dogs, and why these dogs are often snappy in public and end up not being allowed to go with their owner to a cafe.

However I walk many little dogs too as you will see from my facebook posts, and I am looking forward to walking many more little dogs in the inner west of Melbourne - particularly around Newport, Altona and Williamstown - so let me know if your dog wants exercise and fun !