You are here: Home » Blog » The before and after dog walking photo tells it all

The before and after dog walking photo tells it all 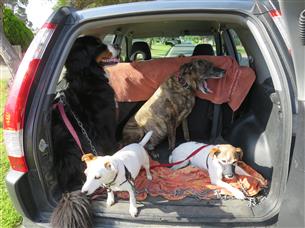 The different from before and after the dog walk photos is night and day.

I have been doing pro dog walking for so long, it is easy to occasionally forget the massive benefit it provides for the dogs and the owners, so every now and then I show the obvious photo comparisons.

The first dog photo on this blog is who they chose to sit in the car before the walk. Amy the Bernese mountain dog has insecurity issues, just her personality from birth. No major problem but in my rides to the park she is often one of the first dogs picked up, and she chooses that corner most times, and sits bolt upright, no eye contact. She is with me every day of the working week, and all the dogs are social, but she starts off the mornings in this non social pose, her brain is protecting her, under false information.

The numerous photos and Videos I show of her having fun in the park are testament to her enjoying her day out and loving the pack.

Tilly at the front was picked up before Amy, she is 100% social, fun and alert, she just wants to get out of there and play or maybe find a rat.

Max on the far right is a 12 year old jack russell. Most mornings that he comes with me (twice a week for a few years now) he gets some kind of exaggerated anxiety (much more so than Amy) so to protect him (the muzzle comforts him down like a dog coat on an anxious dog in winter). He will stay lying down and basically bide his time until we get to the park. He is not a danger, he is just highly strung (for reasons undiagnosed by a vet yet).

Blitz the big brown dog at the back was rehabilitated from being 50% unsocial (due to bad vet advice to chain him up then drug him), and now is 100% social. He knows not to approach Max in the back and he is yawing out of an anxiety release mechanism. He was totally awake when I picked him up and that is not tiredness.

BUT these dogs have been like this small knit pack for a while now. There is no reason to fear each other, but each pick up will be similar to them, as they are reset in-between our walks.

Fast forward to when the dog pack is released, they all run around sniff and do what they ed to shake off the ride and the anxiety of closeness.

BUT the closeness of social dogs in the ride adds to them learning to be social and remaining social, it also helps them bond when they get to the park, from a shared drive experience.

Some of this pack with play with other members of the pack on any given day, they will interact with the environment and other dogs and packs that come along. But they will mostly stay bonded with their own dog pack. 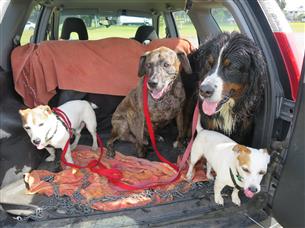 AFTER THE OFF LEAD DOG WALK in Inner-west Melbourne

Notice how Max no longer has the muzzle on. Tilly is at the front ready to go again, and Blitz and Amy are cosy together. Amy is no longer looking out to the side pretending not to be in the car. She ran with the pack and they all bonded again.

They have burned their physical and mental energy, that they needed to, they simulated dog hunts, they ran with and tried to dominate who they could or be dominated by who they allowed (social dogs can make safe friendly choices).

This is a 100% happy satisfied and relaxed pack, about to go home and sleep.

See the difference in the before and after big dog park (off lead ) excursion now??

If you want the same for your social or at least not aggressive dog and live in the inner-west of Melbourne, please contact us
Joomla SEF URLs by Artio