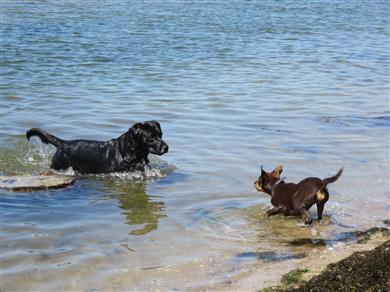 My last dog blog was about why it is important to socialise a puppy and a picture of a very friendly social husky puppy. This week's blog is along the same theme of puppy socialisation, but a hint of what can go wrong if you don't put the effort in.

See, dogs and dog walking is a dying art, because of the invention of the internet and people's desire to make everything about themselves. VERY few people actually seem to know anything about dogs, often including people in the dog parks.


I don't know everything, but I make sure that on my once or twice daily visit that I learn something new each day about making a dog's life better. So this blog is from 'book smarts' and real life learning.

A local phenonomen that is turning out to be a mid level risk, behind large powerful hunting and fighting dogs, is the non social working dog in the dog park. Don't get me wrong, many dogs can be anti social, its just that this blog is looking at the working group dog breed category specifically. The risk of the working dog comes from its stamina, intelligence and size (hence power) if not socialised correctly. In Melbourne (in the working dog group) that mostly seems to be centred around border collies, kelpies and heelers.

I will tell you that I have met plenty of social great dogs and responsible owners, but it appears that there is a growing trend of people rescuing working dogs then locking them in the backyard for safely completely forgetting the immense exercise most of these dogs need, and the need to directed socialisation.

Directed socialisation is the equivalent of helicopter parenting, and is necessary for many working dogs who think that it is their job to herd or nip other dogs like they would sheep or cattle.

The way that many owners who bother to take their working dogs to the park seem to get over this is an hour of fetch at the park, that might physically wear the dog down somewhat as far as energy level goes, but works opposite to the intended effect of the dogs being social to other dogs.  Obsession or compulsive fetch disorder in dog's is a real thing. If they channel all of that intelligence and energy into a mundane repetitive task they will often form obsessive behaviours and aggression to other dogs that get in the way.

The way around this is to treat these dogs like other dogs (not of powerful and large game hunting dogs necessarily that might also require muzzles) but they working dogs that are social need to be regularly allowed off lead, AND WALKED long distances, and at the end of the walk encouraged to play with other dogs, or at least be interested socially in other dogs.  NOT to fear, not to growl, not to bear teeth, not to attack another dog that 'gets in its space'.

The whole 'protecting its territory thing' story is a lame excuse for anti social dogs. A social dog, should allow other people and dogs into its home, with the owner's permission of course. It should not guard any object, home or its 'space'. If you have encouraged this behaviour or not stopped this behaviour there is a fair chance you can't take your dog anywhere, let alone the local cafe. In America you would live in constant fear of being sued. You will constantly be in fear of your dog biting another dog or a child and your life and your  dogs life is diminished rather than enhanced - which is the benefit of social dogs.

PS I love working dogs, but this blog was borne out of a few recent problems I have seen in the park, with perhaps novice owners ...  of course it is NOT all working dogs and not all working dog owners!

More on this in the next blog ...
Joomla SEF URLs by Artio