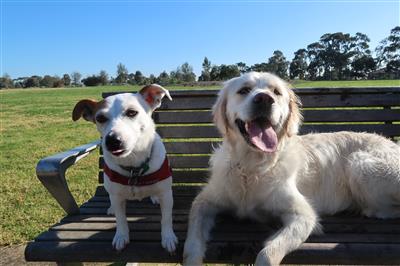 If you walk your dogs in Melbourne in 2017 spring, you the owner and your dog might have some effects of hay-fever. In this article we look at common over-the-counter 'human' grade anti -histamines you can use with dogs, and their benefits and side effects.

Hayfever effects can come on later in life with humans, and so with dogs.

Note itching and skin allergy like symptoms can be the result of organ or gland issues, so its always advisable to see a vet to confirm the cause.

One of the glamour oils of the dog industry, and vital for many functions within a dogs body. However if you get the dosage and ratio right (to omega 6 amounts) it can considerably reduce inflammation issues and skin allergies on dogs (around 50%) have very positive reduction in allergy effects.

My dog used to lick all his feet so much this champagne coloured dog looked like he was permanently wearing brown boots.  After about 4 months of daily doses of Omega 3 (and omega 6) much of his licking (ie itching) subsided.  This is also great news for it working on other hidden areas of his body.  However Omega 3 can only go so far, and sometimes the addition of an anti histamine can make a huge difference.


The value of anti histamines in an allergic dog

I heard the rumour before and didn't fully get the significance of it, then on a visit to a vet recently they gave me a badly photocopied sheet of dosage levels of some common anti histamines you can use for humans.

However like Omega 3, it doesn't prevent or even minimise allergy effects in all dogs - nor does it do it in all humans.

The chart doing the rounds (abbreviated below) is a list of first generation and second generation anti histamines and the dosage levels, as well as potential complications.

In this article I will deal mostly with the second generation (newest) antihistamines that are believed to have the most positive effect and least side effects. I will also go through the side effects and precautions, though you should always consult a vet.

The brilliant thing for many of these is that there is very little chance of overdoses of the generation two drugs. The thing is that increasing the dosage more will just waste money and have the potential of increasing any of the negative side effects, not increase the efficacy substantially, so its wise to stick to the dosage levels.

Dog skin allergies connected to the environment cause a dog skin to be inflamed and itchy, but your dog like the owner will be more susceptible to some types of grasses or pollens than other ones.

This means that its a trial and error test of which allergy medication works best with your specific dog.

Anti histamines for dogs and their side effect

Possible ventricular  arrhythmias in people.  This has not been substantially found in dogs.

Do not use with  ketoconazole or macrolide anitbiotics

macrolide  are used as immunosuppressants or immunomodulators

So if your dog is not being actively treated using these drugs for these issues, then Telfast is fine to trial.

Inhibits eosinophils,  neutrophils, basophils  these are all a specific types of white blood cell

Not metabolised by liver  This is a major issue if your dog has a diagnosed or undiagnosed Liver Or Kidney Problems, because it can cause urine retention and worsen either situation.

People choose zyrtec for their dogs because rarely causes sedation (hence its replacement for Benadryl).  Only use zyrtec where cetirizine is the only active ingredient as some formulations use pseudoepehedrine which is dangerous for dogs.  NEVER give “Zyrtec-D” to your dog.

Do not give if your dog has a liver disease or disfunction.

Mixing clartyne with erythromycin, ketoconazole, and cimetidine can produce drowsiness.

Never give if it contains pseudoephedrine

Warnings below the dosage table:

"Do not combine 2nd generation (except Zyrtec) with ketaconazole, or other azole antifunguls, macrolide antibiotics (erythromycin, lincomycin, clindamycin) especially #Telfast."

one of the most common anti bacterial and anti fungal shampoos in australia is maleseb by Bayer.  Active Ingredients: 2% Chlorhexidine Gluconate, 2% Miconazole Nitrate.

I know most dog owners say that they will pay anything to fix their dogs, but when any of these medications are just as effective on your dog, you may as well understand what the cost might be fore a few months of dosing your dog.

Consider the dosage and cost required for a 20 Kg dog

Anti histamines might or might not work with your dog. If they work they will reduce much suffering !

The good news is that if you take care of the side effects and what drugs not to combine them with they are relatively safe for most dogs (always consult a vet).

GENERAL PRECAUTIONS: Metabolised mainly in liver (except Zyrtec_) – use with care & decrease dose with hepatic disease. Increase risk of cardiac arrhythmias – use with care with cardiovascular disease (especially *Telfast_ and *Hismanal_).

Do not combine 2nd generation (except Zyrtec_) with ketaconazole, or other azole antifunguls, macrolide antibiotics (erythromycin, lincomycin, clindamycin) especially #Telfast.

Do not use 1st generation if glaucoma, cardiovascular disease or urinary retention problems due to anticholinergic effects.