You are here: Home » Articles » Dogs need off lead space to stay social & Friendly, save our dog parks!

Dogs need off lead space to stay social & Friendly, save our dog parks! 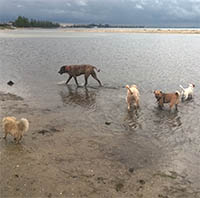 A few months ago while out on a dog walk, a group of us me the Mayor of the Hobson Bay region, who was part of a delegation inspecting the park. We had a good long chat. Nice lady and someone who knows about dogs, and knows about vigilante cyclists .. (but that is for another time).

I was mostly advocating the value of off lead parks, and how in particular many of the dogs I was walking would not be out getting to learn being social if it wasn't for such parks.


I also put forward the case for much larger billboard signage at both ends of the cycle path so that perhaps cyclist would be more mindful of dogs, not run into dogs and injure them, or stir up their chase instinct. Naturally no agreement was reached.

She told me how great she thought it was that a new off lead dog park had just opened in the innner west - near Brooklyn I think.

However she was part of a delegation that came to investigate the use of the off lead dog park. There was potentially very negative speculation about the other bank of the river at the edge of the off lead section. Since three different authorities are in charge of the water way (those that oversee the land, the river and the sea) the mayor said that one group (not council) was potentially concerned about dogs in the water!

Yes, it could be possible that dogs could be banned from water ways in Melbourne!

Here is the 'reasoning' (regardless that many of the waterways are not even kept clean by the groups responsible for their upkeep). Other interest groups (ecological and bird watchers) are apparently concerned with native birds nesting on the other bank of the river, and dogs doing them harm.

Be aware that the last 200m of 'river bank' was not even there a few years ago, but has formed due to the slowing flow of the river, and would in fact be better of being dredged rather than turned into  a bird sanctuary. Yes sand that has accumulated and birds that decide to build nests on the ground might be another way that authorities can reduce areas that dogs can be off lead!

Note this is just speculation at the moment, but if a delegation is surveying the region, there is a GENUINE cause for concern!

There are still a LOT of native bush land out west that birds can nest in, but if a rare species flies a long distance to nest anywhere, it seems that dogs are automatically the losers. If a bird nests on the ground of the other bank, wont natural and feral animals at night time be a bigger issue?

Given that one quarter of households have a dog, you might think that owners might be upset at one of the few dog parks being potentially taken away or restricted further. But given that less than 1 in 1000 people regularly take their dogs for a walk (daily), you can see why there are so few social dogs and why people are not showing concern. Or is it that people don't know about these delegations? Most likely a bit of both.

However if you restrict another off lead dog park, one of the few large areas in Melbourne, you are going to make it so much harder for people to find a good off lead area, and more dogs will become anti social. You cant train a dog to become social, it needs to have sufficient off lead dog park time to learn from other dogs that there is no real threat from them.

I hear that people say that its a balance thing. But the balance seems to be too much in favour of every other species besides dogs. You would think that if dogs were man's best friend, and we care for them so much, that there would be more off lead parks rather than less. But that is not where our society is headed.